We are proud to possess one of the best  grayling and trout fisheries in Europe. 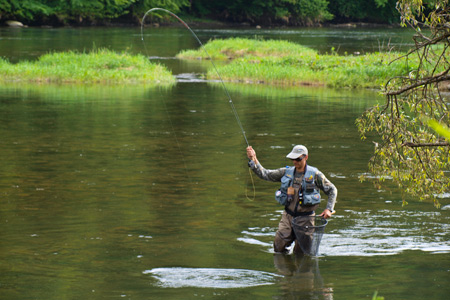 The San is a large river draining from the Bieszczady Mountains National Park in the extreme South-East of Poland.   This area is one of the few remaining unspoilt areas of Europe, much of it wilderness.
It is dramatically beautiful, flowing through forested, hilly country against the backdrop of the massive Carpathian range, which extends from Poland and over the borders into Slovakia and Ukraine.

The fishing on the San is also dramatic almost without parallel in Europe as a mixed fishery for wild brown trout and grayling.  The population density of both species, quite apart from whitefish and certain coarse fish species, is huge.
There are also very large fish present in the San, including the legendary huchen or taimen, a powerful predatory salmonids growing well over 1 meter long, with brown trout exceeding the awesome 70cm barrier, and grayling to well over 50cm. 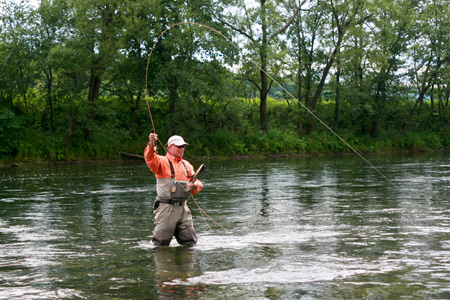 No fly fishing trip to the San would be complete without time spent on the seven or eight kilometres immediately below the turbines of Lake Myczkowce.  Also on the seldom fished rapids and hidden, wilderness waters farther downstream, is the fabric of dreams; an astonishingly prolific stretch of forest-lined water, which once cast over will never, ever be forgotten…

A blizzard hatch of one of the many ephemerid species present, which may happen
at any time from April through to November, is both unforgettable and unbelievable.