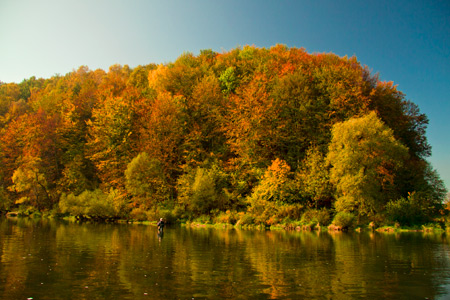 Early Season – February  to mid-May
The fish haven’t seen an angler for few months, trout in spring will eat everything. Due to snow melt, the river is running high making wadding in cold water challenging. It is then that trout seem to love streamers and big nymphs. If you want grayling, then this is not the best time.

Mid Season – mid-May until half July
Fly fishing is now at its best. The rivers have dropped a little, the weather is warmer and more stable, insect activity is high all over the river.  While the fishing pressure increases and trips need to be booked well in advance for this period, the numbers of grayling and trout that can be caught at this time of year is simply astonishing.  The catch is half grayling half trout.

Holiday Season – half July till end August
If it does not get too hot the fishing is good, even comparable to June. The early morning and late afternoon sessions usually give best results – making a few hours break in the middle of the day is very reasonable. There are also many non-fishing tourists who enjoy quiet pursuits at this time of year; they seldom reach the river bank, leaving us calm fishing. You must bear in mind that tourists are at their most numerous in this beautiful region at this time of year. 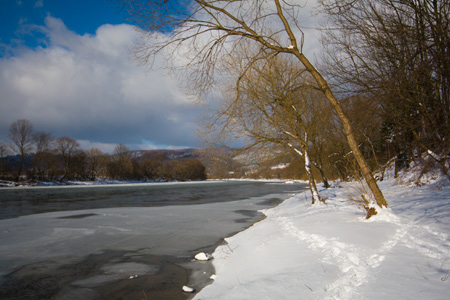 Winter on the San river

Autumn Season – September, October and the beginning of November
Dry fly mystery! Colder evenings and mornings influence shorter sessions, usually between 10 am and 4 pm.   The water is usually very low and clear. When a blizzard hatch happens, you can catch more than 100 fish during a day. In addition, the trees on the bank have a million colours…  You’ll walk in Paradise here; this is autumnal space, with grayling and trout and dry fly riding down the magical waters…

Very Late Season – end November through December
Ever fished at Christmas time with banks covered with snow? San gives that possibility, and in the afternoon you can go skiing! The river seldom freezes and the grayling still feed! This is not a perfect holiday season, but for those who want to try the extreme – this is a solution.